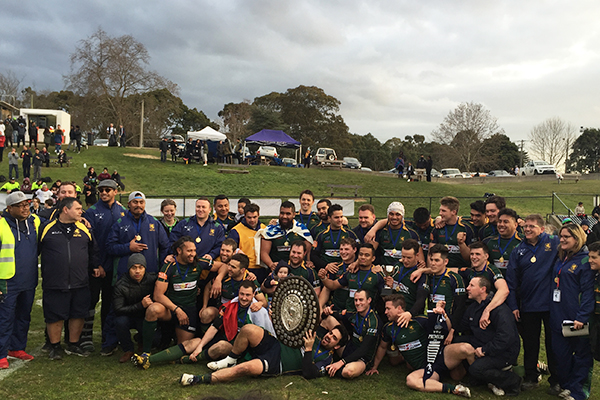 Melbourne have defeated three time defending champions Harlequins 20-19 to win the Dewar Shield grand final. Persistence paid off for the Unicorns as they pulled back a 6-19 deficit at half time to finally beat Harlequins after failing to do so in their first three meetings.

Melbourne got on the board first with a penalty in the 4th minute but the rest of the first half was all Harlequins. The defending champions dominated the tackle area with some punishing defence that left more than one Melbourne player slow to get up after a tackle.

Harlequins scored their first try in the 8th minute. An impressive series of phases saw them shift play backwards and forwards across the field before a hard running Lloyd Johansson took the ball to the line and put centre Oliva Sialau into the gap.

Melbourne had plenty of ball to work with but struggled to break through the Harlequins defence until penalty in the 19th minute put them back in front 6-5.

It was a Melbourne mistake that helped Harlequins regain the lead after the defending champions regathered a high kick that Melbourne failed to field. On the front foot, Harlequins quickly spread the ball into space and lock Murray Douglas barreled over the try line after an impressive run. The conversion attempt hit the post but fell through giving Harlequins a 12-6 lead.

Harlequins were the team taking their chances in the first half with both their trips deep into Melbourne territory resulting in tries. Their third came in the 34th minute. Halfback Antonie Van Zyl couldn’t quite finish off a break from a midfield scrum but inside centre Eli Vole scored two phases later giving Harlequins a 19-6 lead going into half-time.

It was a clinical performance from Harlequins in the first half. Their big forwards dominating at the breakdown and despite plenty of ball Melbourne were unable to break through a well organised and punishing Quins defence.

Coming out in the second half Melbourne sensed they would need to start scoring tries. Giving up an early kickable penalty for a scrum almost didn’t pay off, but eventual man of the match Mick Snowden took a quick tap from a penalty and dove over the line for the Unicorns’ first try. A successful conversion closed the gap to 13-19.

The real turning point came shortly after. Snowden was hit hard after taking a clearing kick. He looked to be in some distress but played on despite noticeable pain. The hit on their halfback got the Unicorns fired up as they started to gain the upper hand, clearing out at ruck time with real intent.

The mistakes started creeping in for Harlequins and things got worse when flanker Zac Dixon was sent off in the 53rd minute.

Melbourne very nearly capitalised right away when a try was deemed held up. A turnover from the following scrum time relieved the pressure for Harlequins and they managed to clear their goal line.

As the match moved into the final 10 minutes, Melbourne kept pouring on the attack but little mistakes kept letting Harlequins off the hook. An audacious grubber and chase from Unicorns captain Sam Vaevae nearly paid off but Harlequins once again escaped.

It was in the 75th minute when the Harlequins defence finally cracked. After multiple phases of pick and drives Melbourne crashed over the line setting up Oliver’s game-winning conversion and giving Melbourne an historic 20-19 victory.