Melbourne Rugby Union Football Club is one of the oldest clubs in Victoria and was officially established in 1909, although a club played under the ‘Melbourne Rugby Union’ banner as early as 1888. Three games are recorded as being played that year – one against an English touring team and two against a New Zealand Maori side. All three games resulted in losses – but the game they play in heaven had arrived in Victoria.

The establishment of Melbourne Rugby club, along with four other clubs before 1914, led to a regular competition, but few records of this era survive. Victorian rugby was a somewhat stop start affair, due in no small part to the impact of World War I.

The Victorian Rugby Union (VRU) was established in early 1926 which, in turn, led to the formation later that year of four more clubs, namely St Kilda, Kiwis, Navy and Air Force.

During the period 1930-35, Mr D.L. Cowper became the club’s and Victoria’s first Australian international representative and, in 1933, captained Australia against the Springboks in South Africa.

After the Second World War, Melbourne switched to playing in an ‘Australian Green’ jersey, generously donated by Randwick RUFC (Sydney) – primarily due to the shortage of all woollen/cotton sports gear in the early days after the war. This “temporary loan” of colours lasted from 1946 to 1998.

In the early days of the late 1920s and 1930s, Melbourne Rugby Club’s motto of that era was “Praemia Post Habeas Ludo” (loosely translated as “After the Battle, Enjoy the Prize”). Following the club’s amalgamation in 1939 with Old Boys Rugby Club and prior to his departure, for military duties in World War II, the club accepted the recommendation of club member E.E. “Weary” Dunlop that the rampant unicorn become the club emblem along with his suggested new club motto “Never a step backward”.

Both the emblem and the motto along with the club’s victory song “We’re on the Road With Melbourne’s Army” are still deeply embedded in the Melbourne Rugby Club ‘psyche.’ Another mark of recognition of Melbourne RUFC was introduced by R.I. Kingman in the early Sixties. The sound of ‘Who’s that man with the big red nose’ has become synonymous with MRUFC throughout Victorian rugby circles.

In recent years, MRUFC’s playing kit has reverted to the stripes of old. In 1998, Melbourne began playing in their latest strip.

In 1999 MRUFC gained the rights to play on Romanis Reserve. Now known as Orrong Romanis Park, it is situated on Orrong Road, between High Street and Malvern Roads, Prahran (opposite Toorak Park), and is regarded as one of the best playing surfaces in the Victorian union. 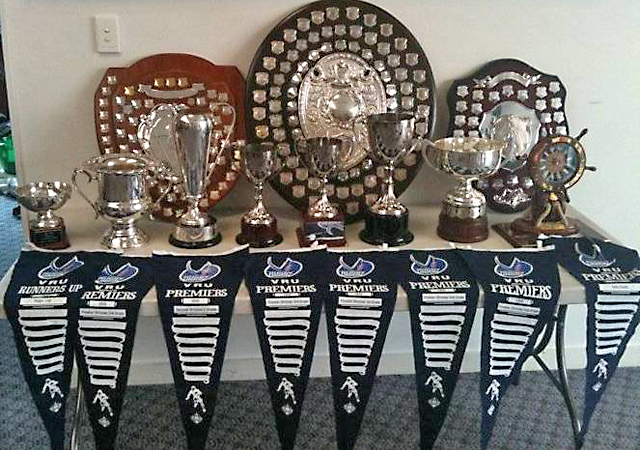 Michael O’Brien
All rugby followers are aware of the famous photograph taken at Twickenham during the England/France test of 1974. Mike was the first person to streak at a sporting event and he started a phenomenon that has encircled the western world. Newer club members may not be aware that Michael is a member of the Melbourne Rugby Club and has been for many years. Michael was a hooker, who played 207 games from 1978. He is a stockbroker with Patersons Securities. A new photograph has been unearthed that shows our Michael running on the field, before he was apprehended by the gendarmerie. If you look closely you will see that it was very cold that day.

Ted Baillieu
Club member Ted Baillieu is a former Premier of Victoria. Ted is an architect by profession and he designed our clubrooms. The ladies, who have to go downstairs to the toilet, can blame him for their troubles. He played 120 games for the club, scoring 15 tries from lock. Ted also captained the 1973 Colts premiership team, represented Victoria and coached the 1982 Colt’s side. He is a member of one of the more prominent families around Melbourne and he once hosted the Club at the family compound in Portsea – a very brave thing to do.

Gerry Hueston
Gerry was appointed President of BP Australasia in September 1993, which is a pretty good achievement for a member of the front row club. Gerry played 100 games made up of 34 First Grade, 17 Second Grade, 18 Third Grade, 6 Fourth grade, 25 Social Grade and scored 26 tries. The idiot, behind Gerry, trying to get into the photo is not one of the Club’s high flyers.

Angus Sampson
Angus has appeared in radio, theatre, films, and more recently in “Thank God Your Here” on Channel 10. He was a handy forward who played five First Grade, nineteen Second Grade and one infamous Third Grade between 1998 and 2002. In his last and only Third Grade match, he punched a Harlequin and was sent off. Normally, this would have been considered appropriate behavior. Unfortunately, Harlequins were short and he punched one of us, who was standing in for the opposition. We have not seen him since! He was only a Pom, Angus; come back, all is forgiven!

Dave Fitter
Dave was one of our colts in 1997. He left Melbourne to travel north in order to further his rugby career as a prop. He played senior club rugby for Sydney University and played super rugby for the Brumbies and the Force. Dave won two Wallaby caps against England and Wales in 2005.

Tamaiti Horua
Tamatai was born in Nelson in the southern part of the Eastern Islands. However, he learnt his rugby in Melbourne under the watchful eye of his father Kingi. Tamaiti joined the Western Force from Japan, where he spent two seasons with the Toyota club. Prior to that, the flanker was a regular at the Brumbies, having made his Super rugby debut against the Blues in 2002. He played for the Australian U21s in 2001 and captained the team the following year, later representing Australia A in 2003 and 2005.

Ken Stokes
Older club members would remember club legend Ken Stokes. Ken was a no nonsense, tough second rower who played with Melbourne in the seventies. Stokesy left the RAAF and went on to be a co-owner and managing director of Hunter Aerospace. Hunter Aerospace carry out the maintenance on the FA/18 fighter and were given the contract to build the Hawk Trainer. Ken and his partners recently sold Hunter Aerospace to BAe Systems. He is now doing very well.

Ralph Waters
And even older members will remember Ralph Waters. Ralph was a speedy winger and also edited The Unicorn – our club magazine in the early seventies. After leaving Melbourne, Ralph went on to become CEO of Email before it was taken over. He has recently retired as CEO of Fletcher Building and now amuses himself with his half dozen directorships. When Ralph is not speaking at a meeting of one of his boards, he is singing a song he wrote many years ago, in collaboration with Rod McLeod, called “A Hairy Arse” and sung to the tune of “Aquarius.”