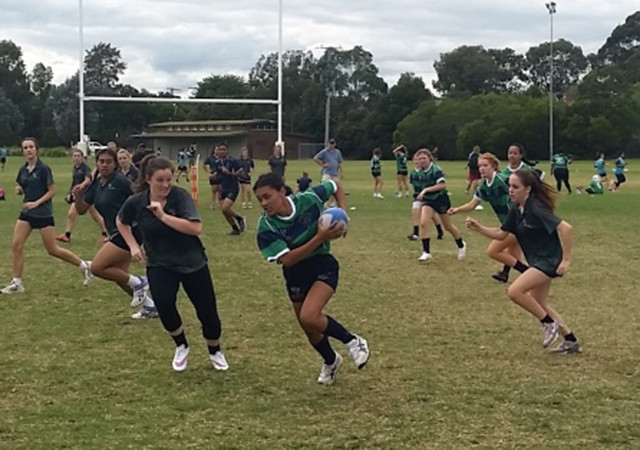 The Melbourne Unicorns are calling all girls between the age of twelve and seventeen to get involved in the Australian Rugby Union’s (ARU) new VIVA Sevens Sport competition. A fun, non-contact and fast-paced game of rugby sevens.

The Rugby Sevens format competition kicks off on 13 June, and will run over seven weeks including a finals week to coincide with the Victorian Rugby Union’s (VRU) Senior Women’s Rugby Grand Final.

The program will be structured around the six senior Womens Clubs. Melbourne Unicorns, Harlequin, Melbourne Uni Panthers, Western Districts, Power House and Moorabbin have all expressed interest in fielding sides.

Make sure you register with the Melbourne Unicorns below!

VIVA 7’s is the new, non-contact version of rugby 7’s that can be played by male and female of all ages, no matter the sporting background or experiences. VIVA 7’s gives participants a safe and fun environment to have a high intensity workout. It’s the best way to get fit and have fun with your family and friends.

All the VIVA Sevens teams play together at one venue in a round robin type competition. They will play in the mornings before the senior sides at the same ground, to create a community feel with all the girls there together.Plans regarding recruiting players, coaches and managers will be released shortly.

VIVA Sevens has been introduced to bring new participants to rugby as well as give current players a social brand of game involvement. VIVA 7’s allows juniors to learn the nuances of the sport, while practicing the basics, in a fun and safe environment. It allows for people of all abilities to explore their creative side.

There are a maximum of 7 players on the field in each team. Teams have 7 ‘touches’ to score a try. There’s two 7 minute halves and, at typical VIVA 7s Centre’s, teams play up to two matches each session.

There’s action on and off the field – Fresh, funky vibes pumping around the grounds, will get you grooving and stepping on and off the pitch. Once your game is finished, there are a number of social opportunities to partake in to mix it up with your mates or family.

Memberships – Join Now
To arrange to play rugby at Melbourne all you need to do is fill out the membership application form and turn-up to our club grounds for training.