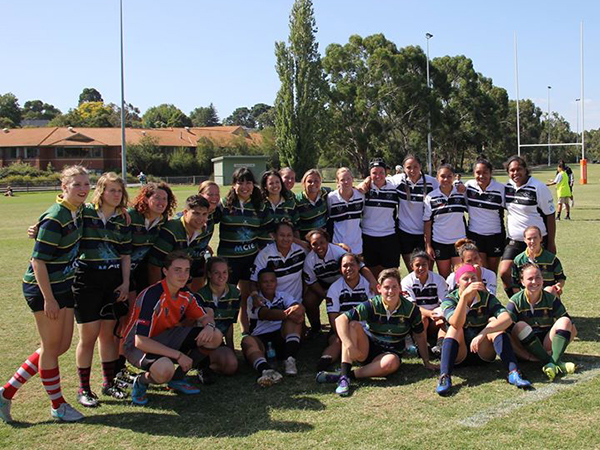 At the recent Women’s Rugby Summer 10s Tournament held at Harlequins Rugby Club, the Melbourne Unicorns were dealt a tough draw with the defending Premiers Uni Panthers first up. With only five returning players and the rest of the squad new to rugby or the Club it was an unknown package. The players had been working hard through the preseason on their core skills and game structure with Head Coach Alana Thomas and Assistant Coach Hartley Tawhiri.

Melbourne started the first game slowly and spent the majority of the half defending. The team showed some real ticker in defence but Uni Panthers were able to score two tries. After a quick pep talk the team started the second half well and maintained possession to score three tries in the second half to win their first match 17-10.

The second game of the day was against Power House and after only 15 minutes break it was straight back on the field. Again Melbourne started slowly and allowed a couple of early tries to Power House. Just like the first game the Unicorns kicked into gear in the second half and ran away with the game to win 19-10. The key to the game was the team’s ability to support each other and ball movement to the speedsters out wide.

The third game of the day saw Melbourne take on Western Districts. Unfortunately the opposition’s physicality and tight play saw them dominate possession and really shut Melbourne out of the game. The Unicorns struggled to maintain their defensive structure and allowed the opposition team to score two tries and win the match comfortably 12-0.

The last game of the day doubled as the Final and saw Melbourne take on Moorabbin. The 2015 Premiers had looked strong all day and you could see the work they had been doing in the off season. This was always going to be a tough game and it was. Unfortunately the hard running Moorabbin side were able to bend Melbourne’s mid-field defence and score early. Melbourne’s scramble defence had been good all day, but with the strong ball runners Moorabbin were throwing at the team tackle technique went missing. In the end Moorabbin ran away with the match 33-5.

With 2017 being a Women’s Rugby World Cup year the State program is well underway with a number of Unicorn players again putting their hand up for selection. This year Melbourne’s Head Coach Alana Thomas will also coach the State team. Watch this space for selection news at the end of March.