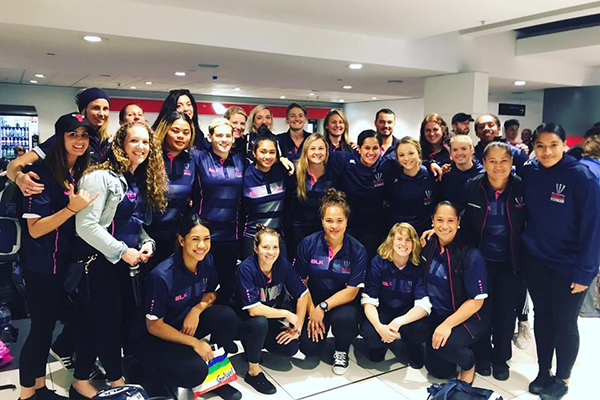 Recently the Victorian Rugby and the Melbourne Rebels celebrated the contribution of our girls and women’s players across the state during Women’s Rugby Week. This fell in line with the State Team heading to the Gold Coast to participate in the National Championships.

Recently the Melbourne Rugby Club had six players who competed at the National Championships – Oneata Schwalger, Katherine Temple, Georgia Cormick, Samantha Homewood, Annmarie Collins, Gemma Hocart, with Physio Katherine Taylor and Alana Thomas as Head Coach. Unfortunately Victoria was not able to secure a win, but all agree the experiences gained will hold the team in good stead for the coming years.

Our own players had a great tournament – Oneata Schwalger often leading with her hard running and bone rattling defence. Georgia Cormick was strong at fullback making a number of try saving tackles and sparkling counter attack from Fullback before moving to Flyhalf at the end of the tournament. Katherine Temple and Samantha Homewood were terrific in their first National Tournament. Temple’s presence in the lineout was missed on day two, but she came out fighting on day three and was a standout with her work rate. Homewood was strong coming off the bench and was strong in general play, with a high work rate and really lifted the team when she took to the field. Annmarie Collins was strong at Prop, being one of the smaller Props at the Tournament was not an obstacle for her she gave as good as she got and was quite sore after all of the games.

Both Collins and Homewood are the players all coaches want to work with, always positive and uplifting on the field, and fighting to keep going forward. Gemma Hocart was solid when she hit the field, as a Halfback with limited attacking opportunities she was able to drive the forwards in attack and defence.

Thomas has said a number of people will look at the results and be disappointed, but from an internal point of view this year was about setting the platform for the State program and moving it to a more professional program to allow players to prepare and perform at the next level.

This has been achieved with a number of players commenting that the culture and standard has been set, even the National coaches had noted that out of the eight teams at the National Championships 3-4 had improved from last year and Victoria was one of them. As always Thomas has high expectations of herself as a coach just as she did as a Wallaroo, but she is very proud of every player that went out and tackled their hearts out.

The team would also like to acknowledge Physiotherapist Katherine Taylor, who was on hand throughout the Tournament to patch up the players who were very fortunate to have such a highly skilled professional available to them.

Here in Victoria the Women’s competition took a break, but put together two 10’s teams that played in an exhibition match as the half time entertainment during the Rebels and Reds match. The Melbourne Rugby Club was well represented, with Aroha Nukunuku, Joe Kimitaunga, Philo Yakopo, Bethany Fernandes and Jo Lumsden all enjoying the experience of getting to play on AAMI Park.

There is no doubt that women’s rugby is growing in Victoria and the Unicorns continue to actively support the work of the Women’s Rugby Development Association (WRDA), which is now being led by our very own Annmarie Collins.

The WRDA is affiliated with the Victorian Rugby Union and the Melbourne Rebels. The association supports the development and growth of women’s rugby, both 15s and 7s, in Melbourne, Victoria. With both a 7’s and 15-a-side National tournament played each year and pathways to play the game internationally there has never been a better time to get involved.