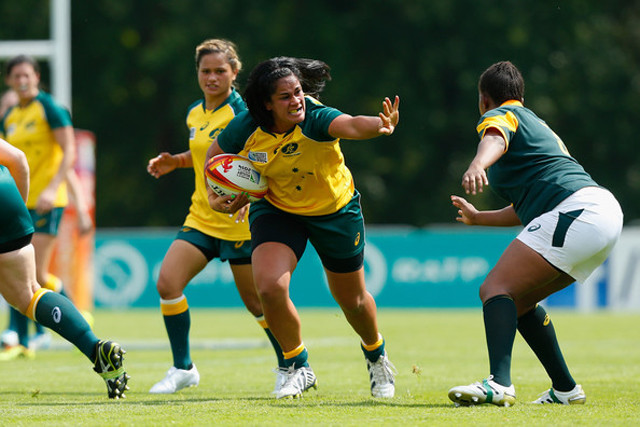 Prop Oneata Schwalger will be flying the flag for Victoria when the Buildcorp Wallaroos face the New Zealand Black Ferns in a two test series in New Zealand this October. As the lone Victorian representative in a 26-woman squad that includes 13 uncapped players, Schwalger said she is proud to represent the State wherever she goes.

“Victoria is a highly competitive state for all sports so I’m repping Victoria hard when I’m in the Wallaroos camp and anywhere I am in Australia and the world. I’m a very proud Victorian.”

The highlight of the series will be a chance to play at Eden park in the curtain-raiser for the third Bledisloe test on 22 October.

“It’s always been a dream to curtain raise an All Blacks versus Wallabies match. This is huge for women’s rugby in Australia,” said Schwalger.

“Having exposure to playing at that level in front of 60,000 people is going to be massive for the girls.”

The Wallaroo’s are yet to defeat the Black Ferns in 14 attempts but Schwalger said an experience core of players means the women’s team are poised to be the ones to end Australia’s Eden Park hoodoo.

“Anything can happen and I’m so confident that if the girls do the work, we can make history. We’ve got a lot of girls this time that have been at the international level before.”

2016 has seen Victorian women’s players participating in the Melbourne Rebels Emerging Players Program for the first time and Schwalger said the benefits are paying off.

“Victoria is fortunate that we’re the only state that has a women’s emerging players program. We’ve learnt so much just being around that level of professionalism and having access to high-level coaches and programs. It’s is what the elite-level men’s players have so it’s awesome that now we do too.”

While 7s rugby in Australia is on a high after the gold medal success of the team in Rio, Schwalger said the fifteen-a-side game is also on the rise due to renewed investment in the sport and more opportunities for players.

“It’s great that we’re getting more camps and test matches. We need to play games so we build up combinations and build up a really good depth for women’s rugby in Australia.

“It’s great now that we have a sponsor that is there to promote fifteens. I said to the younger girls at the Wallaroos camp: ‘you guys have such a great platform; you girls are so lucky!’”

The Wallaroos come into camp on October 15, flying to New Zealand on October 17 ahead of the first in their three-match tour, a game against an Auckland representative side.