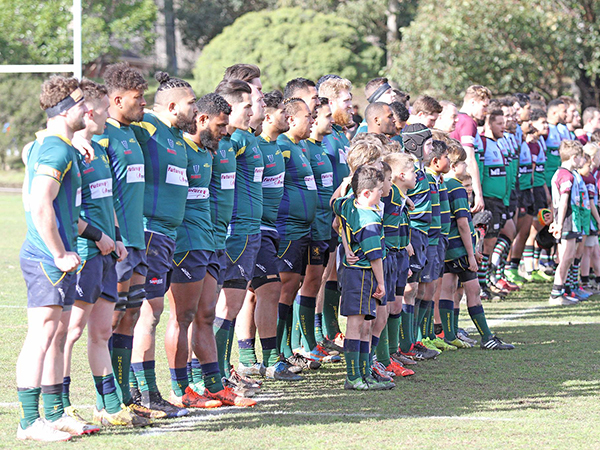 The Match of the Round for Round 5 of the 2018 Dewar Shield will see a 2017 Grand Final replay as Melbourne take on Harlequins at Romanis Reserve. Melbourne and Harelquins both come into the match undefeated this season, with the sides sitting in first and second on the Dewar Shield table respectively. This match will be the first time the sides have met since the 2017 Dewar Shield Grand Final.

The top of the table Melbourne has had an impressive start to the year. Through the first four rounds, the Unicorns have accumulated an incredible points differential, with the side scoring 224 points yet only conceding 22. This has meant the side has come away with Bonus Point victories in all four matches. The highlight of these games came last week, with the side putting in a devastating performance to claim a 72 – 5 victory against Box Hill.

Their opponents Harlequins have also had a strong start to the 2018 Dewar Shield Competition. After just getting by Footscray in Round one, Quins have put up three successive 10+ point victories against Moorabbin, Box Hill and Power House respectively. They will be looking to continue this form and repeat their efforts in the 2017 Grand Final this weekend. This game will definitely be one not to miss.

Match of the Round will be Live Streamed on the Rugby Victoria and Melbourne Rebels Facebook page. Kick-off at 3:10pm.

We sat down with the opposing sides to hear their thoughts on the upcoming match-up.

How do you feel your side is tracking after the first four rounds?

Each week the team has lifted in performance and the results have gone our way, we know it’s a long season so we are focusing on doing the little things right each week.

What did your side take out of the fourth round match against Box Hill?

There was a lot of confidence after the game against Box Hill especially the defensive effort shown by the team. To be able to restrict such an attacking team like Box Hill to one try was real positive.

Same as every week, fine tuning our structure and working on improving the basic fundamentals, focusing on finishing off every point scoring opportunity.

Which players should we keep an eye out for in this Melbourne Squad?

Can’t really single anyone out. Across the board last weekend our forwards really set the platform up front and the backs executed well out wide.

What do you think Quins will bring to the match up?

Structure and intensity, very well drilled team with a lot of experience.

What players will you be wary of in this Quins side?

They have experience all over the park, Peter Breen has really been taking control, there forwards are strong set piece and they have strong ball carrying midfields with pace out wide. Every time these two sides meet it’s a good battle.

How do you feel your side is tracking after the first four rounds?

The guys are getting the job done each week, but we aren’t playing the full 80 minutes. In the last two weeks we have been dominant in stages and then switched off that has let the opposition back into the game, but we were able to steady and hold on for the wins.

What did your side take out of the fourth round match against Power House?

Our defence is holding up well if we keep our patience and discipline.

Playing the full 80 minutes and making sure we convert our opportunities when they arise. Turnover ball both ways is going to be vital this week, so reacting when the turnover is against and for us.

Which players should we keep an eye out for in this Harlequins Squad?

Eli Vole has been very strong the last two weeks at inside centre, he always ensures we get good go forward ball and is a rock in the centre of the field in defence.

What do you think Melbourne will bring to the match up?

Melbourne are the form team of the competition, much has been made of their attack and the scintillating backline having scored 224 points in four games. But in defence they have only allowed 22 points against across four games which is an incredible achievement.

What players will you be wary of in this Melbourne side?

The entire backline is relatively new to the Dewar Shield and from all reports every single one of them is dangerous and can make you pay if given the opportunity – so our defence across the park is going to be tested.