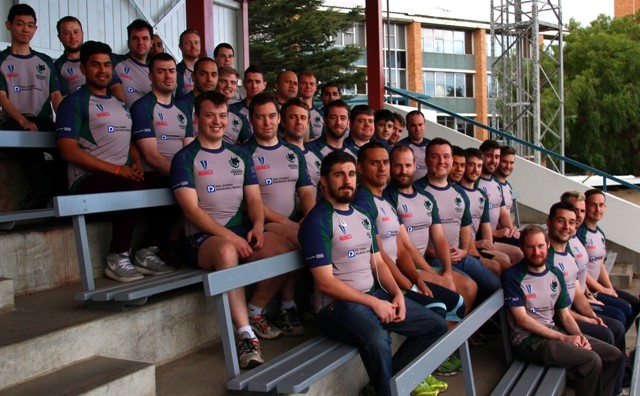 This Friday night at AAMI Park, the Melbourne Chargers take on their rivals, the Sydney Convicts, before the RaboDirect Rebels take on 2014 Super Rugby Champions, the Waratahs. It will be the first time in history that two gay inclusive Rugby teams play a curtain-raiser to a Super Rugby game.

To find out more about what this means to the Melbourne Chargers, Michael Smith from melbournerebels.com.au caught up with Mark Rowland, one of the Chargers taking to the field on Friday night, and Amy James, a long-time supporter of the team.

Michael Smith: The Chargers have been around for just over five years now and the two of you have been with the Club for most of this time. Did you ever think that you would see the Chargers playing on the main stage?

Amy James: Well, at the start it was just a bunch of us throwing the ball around in the park, thinking it would be a fun idea to try to start an inclusive Rugby team in Melbourne. I think if you told us at that time that in just five years we’d be playing on Melbourne’s main Rugby stadium as a prelude to a professional match, we’d have thought you were pretty crazy.

Mark Rowland: It’s been quite the journey. We’ve had such amazing support from both the Rugby community and the gay community in Melbourne over the years to get us to where we are today. Last year we sent two full squads to the Bingham Cup in Sydney – the world cup for gay inclusive teams – and really made our presence felt. We took out the Bingham Plate, our first ever piece of silverware at a major tournament. Our Club has really built itself up over a short period of time, however I can’t say in the early days of the Club, where we had only a handful of players, that I thought we’d get to where we are today.

MS: Tell us a bit about what it means for the Chargers to take to the field at AAMI Park.

MR: I think it’s the culmination of a great deal of work by a lot of really dedicated people over the years. My own story is that I played Rugby as a kid in New Zealand but never really loved the game or its culture. With the Chargers it’s a totally different environment where we make a real effort to be welcoming and supportive. A lot of the guys who come to play for us turn up to their first training having never picked up a ball before, so we put a real focus on coaching and teaching our inexperienced players. And it creates some fantastic stories – both of our starting locks on Friday, Josh Maloney and Dan Syrus, are guys who only started playing last year, and now here they are, playing at AAMI Park.

AJ: I think it’s also a great way to recognise the work that we’re doing to make Rugby a sport which welcomes everyone. The real beauty of Rugby as a sport is that it has a place for everyone – short or tall, strong or fast, athletic or, well, more generously-proportioned! The Chargers just take that one step further – by making sure that we create an environment that is inclusive for everyone, regardless of their sexuality. We’ve opened up a space in which everyone is free to be themselves.

MS: Hearing you use the word “inclusive” to describe your team is interesting as most people would just call you a gay team. What’s so important about using that term?

AJ: Well I think it’s important to understand that you don’t have to be gay to play with the Chargers. We’ve always had some straight players who just love playing with us because of what we stand for. So the Chargers are not being exclusive, or trying to create something which separates gay and straight people – quite the opposite. When people show up to play, or want to help out and be a supporter we don’t ask them what their sexuality is. It’s important because it represents an environment where the sexuality of a player or supporter is never an issue.

MR: I prefer to think we are a team built on our values – inclusiveness, being active and healthy, being encouraging and supportive, striving to be our best and fostering mateship. These are things that most people who play Rugby would be familiar with. So in that sense there’s nothing out of the ordinary about the Chargers. But at the same time we play a hugely important role in reaching out to a part of the community that has tended to feel excluded from sport, particularly team sports like Rugby union.

MS: You’ve been playing in the Victorian Rugby domestic competition for many years now – what’s the reaction to your team been like?

MR: It’s really blown us away. At first there was some scepticism that it would work, but the other teams we have played against have just been fantastic. It’s a smaller Rugby community in Melbourne than in other states and people can see that we are bringing new people into the sport. Last year we had two teams – one in Division 3 and one in the Masters grade. In Division 3 we made the finals with one of our guys, Arnaud Kamtcheu, winning best player in the division. In the Masters division there were less wins but just about every week we had new guys playing, and we played with great spirit and heart each game. We have a beer after the game with our opponents just like everyone else.

AJ: Our host Clubs – Footscray at first and now the Melbourne Unicorns – have been so important. They have really made it all possible, with the coaching and support that they provide. Having the Rebels supporting us too makes a massive difference. Lachie Mitchell has joined us as a coach this year and we’re proud to have people of his calibre on board.

MS: Your opponents on Friday, the Sydney Convicts, are the reigning Bingham Cup champions. How is the team feeling about taking on its great rival?

MR: The Convicts have really set the standard. In Sydney last year they not only hosted a fantastic Bingham Cup but also won the final in impressive style. So it’s a tough assignment but the guys are feeling really confident with their preparation for the game. At Bingham Cup quarter finals our guys drew 0-0 with the Sydney “B” side in what was widely acknowledged to be the match of the tournament. It was a hard, tough, physical encounter, with neither team giving an inch – they couldn’t be separated even after extra time. In the end Sydney progressed due to a better record in the pool stages, but we really made our mark at that game.

We also played against the Convicts early last year in the Purchas Cup – the Australasian equivalent of the Bingham Cup – and we had the lead on them at half time, losing narrowly in the end. The Brisbane Hustlers went on to beat them in the final of the Purchas Cup – although Sydney turned the tables in the Bingham Cup final last year. So whilst I think the Convicts have been out in front, it seems the gap is closing. However, there’s no doubt that the Convicts will be a very tough opponent on Friday night.

MS: What are you hoping for on Friday?

AJ: Well, a win for the Chargers, followed by a win for the Rebels, of course! But aside from the obvious, I’m hoping for it to be a real celebration of everything we’ve achieved. Lots of people have been involved – not just players and coaches, but just as importantly, supporters who do much of the hard work to keep the teams on the pitch and get them to Bingham Cups. Anyone who’s been involved with a Rugby team knows there’s a huge amount of work that goes on both on and off the pitch and the Chargers are no exception. So I’m hoping we can use the occasion to really show our thanks to everyone in the Rugby community – Melbourne Rebels included – who have supported us.

MR: We’ve been recruiting lots of new players and we are training three times a week to get ready for the new season. We hope to continue putting two teams on the park each week and for a whole lot the new guys to gain some match experience. In September we’ll be off to Auckland for the Purchas Cup and we’re hoping to send two teams across the ditch. It’s the first time this tournament has been held in NZ, and as a Kiwi myself, I’m really excited about going back home. We’ll then finish the year preparing for our biggest challenge yet, the Bingham Cup, in Nashville in May 2016. So things just keep getting bigger and bigger for us. It’s an exciting time to be a Charger.”

If you would like to know more about the Melbourne Chargers, or get in touch, please click here.