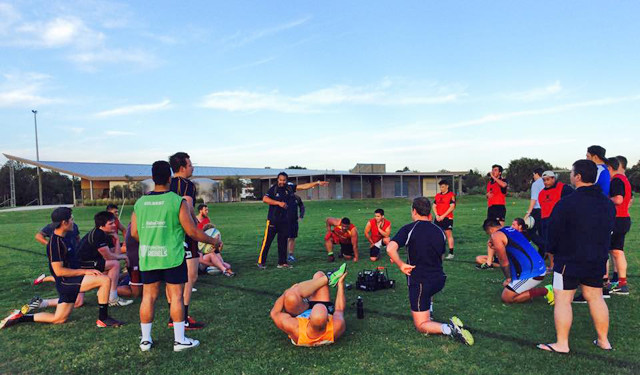 The committee are delighted to be able to report that appointments for the Dewar Shield (Premier 1) coaching team, along with most other coaching roles for next season, have been made. We were determined to put the organisational structure and people in place as early as possible, to allow the coaching staff to begin 2015 preparations immediately.

Along with the coaches we also wanted to create a strong support team to facilitate the practical requirements the players and coaches need.

The Premier 1 Team will be coached by Anare Koliavu and Tumai Edwards. Anare (or Razor as most of us know him) will be the head coach and forwards coach, while Tumai will be the assistant coach and backs coach. Along with a background with MRUFC, Anare and Tumai have strong credentials as coaches and players. Anare has represented Fiji and the Western Force, has played for WA and in the NPC in NZ. He has coached at a number of levels in WA as well as coaching the Southern Lions 7s.Tumai has played at age group levels for NZ and played NPC for Auckland and Hawkes Bay and coached at a number of levels in NSW and NZ. We wish them all the best in their vital roles – feedback on the appointments from the playing group has been universally positive.

Andrew Bowring has been appointed to head up and be the forwards coach of the Premier 2 side. Andrew is a former Sydney Uni player, referee and has coached at a number of levels in NSW and Victoria.

In addition we have made a number of appointments in key support and operational roles.

Gerry O’Neill will manage rugby operations, assisted by Ray Evans. This will include being responsible for appointment of team managers and all other operational aspects of pre-season and in-season rugby and game management.

In a key appointment for the club Todd Louden has taken on the role of coaching mentor. Todd is the Rebels attack coach and has coached at both the Waratahs and the Bulls, as well as at various levels in NSW and Japan. His experience will be invaluable for all of our coaching staff to draw on – his appointment is a major coup for our club and we look forward to welcoming him in proper style to the Unicorn’s family.

Ellis Meachen has been tasked to further establish and run the academy program and will also take on the role of player development manager. These are key strategic roles within the club which Ellis is eminently qualified to fill.

The people appointed to the coaching and support roles form a very exciting and dynamic team. We can approach season 2015 with great enthusiasm and confidence. Congratulations to all on your appointments.

Please contact Tyrone or Gerard if you would like to help fill one of the roles still to be finalised.