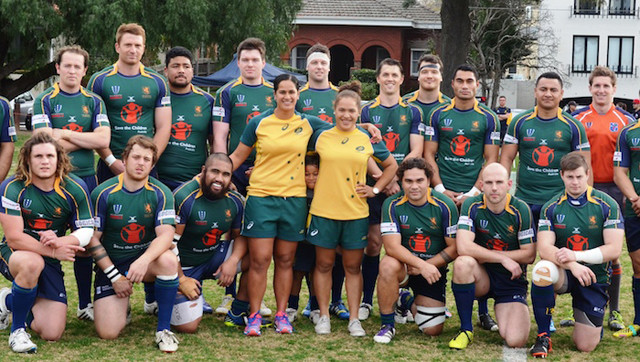 Oneata Schwalger and Ashley Masters named for World Cup Squad
The Wallaroos squad that will travel to Paris for the 2014 IRB Women’s Rugby World Cup in August was announced today with three regulars from the Qantas Australian Women’s Sevens team named. Sharni Williams, Shannon Parry and Cobie Jane Morgan make a return to the Wallaroos squad after a successful run on the IRB Seven’s circuit.

The Wallaroos will be aiming to improve on their third place finish in the 2010 IRB Women’s Rugby World Cup.

Head Coach Paul Verrell said the players’ preparation has been good with two strong hit outs against New Zealand and Canada during the Tri-Nations tournament in New Zealand earlier this month.

“Although we didn’t get the results we wanted, from a coaching perspective we now know exactly what we need to target and have adjusted our training programs accordingly.”

“Having three representatives from our hugely successful Sevens set-up highlights how the ARU’s Wallaroos and Sevens program are working in tandem for this World Cup campaign.”

Also named in the squad was Wallaroos veteran flyhalf, Tui Ormsby, who will represent Australia in her fourth Women’s Rugby World Cup, becoming the first Australian Woman to do so.

“Tui showed in New Zealand why she is considered such a strong leader in the team,” Verrell said.

“She is a great mentor for the younger players and her experience going into a tough World Cup campaign will be invaluable for the entire squad.”

There are 12 players in the squad who will be going to their first World Cup.

The Wallaroos will assemble at the Sydney Academy of Sport in Narrabeen on Monday, 21 July for a seven-day camp to finalise their preparations for the World Cup before they fly to Paris the following Sunday.

Verrell’s side has been drawn in Pool C alongside Wales, South Africa and host nation France.